Congratulations to our Winners of the “How do you Floss?” Campaign!

We had so many amazing entries to the Floss Campaign and are very happy that our patients got so creative! It’s seriously mind-boggling how many ways we use floss.

Since we had two campaigns, one for Lane & Associates and one for NC Oral Surgery + Orthodontics, we have TWO Grand Prize winners of the Apple Prize Pack!

Take a look at our winners & their submissions below: 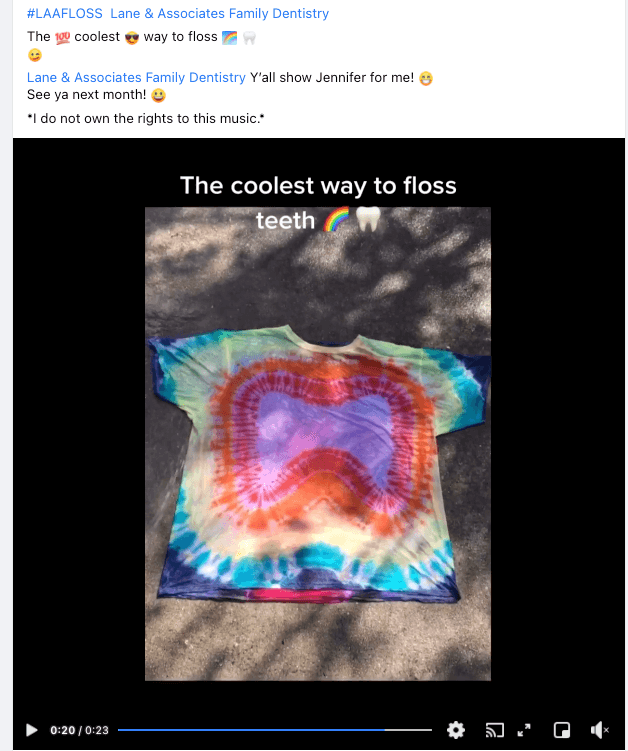 Diane showed us how she uses floss to tie-dye her t-shirts and create fun designs (like teeth – you know we love that!) Here is her entry above!

Yan showed us how they used floss by creating a Claymation stop-motion video showing us how floss is used to cut and shape clay. Also making some cute teeth!

We will be contacting our 2nd place prize winners individually and letting them pick up their prizes in the office. Here is one of our happy winners! 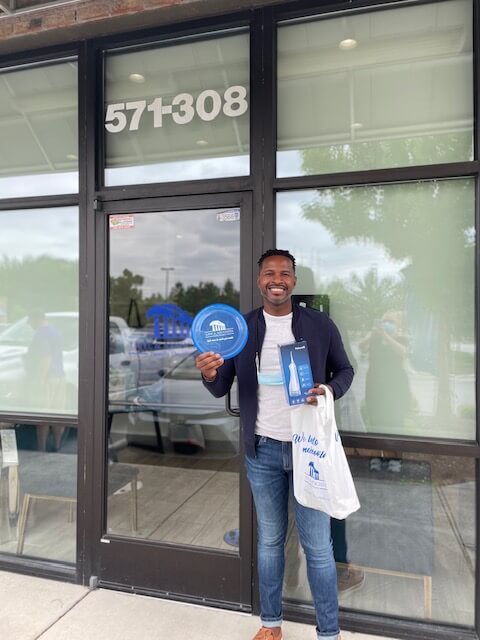 Thank you again to all of our patients who participated and showed us just how amazingly talented our LAA crew is! We love to make you smile and hope that you will be on the lookout for our next patient contest soon!

Have you heard the news?!

Lane & Associates Family Dentistry is giving away an Apple Prize pack during our ‘How Do You Floss?’ Campaign!

You can win all of the items below by submitting a fun photo, boomerang, video, Reel, or TikTok showing us a creative way you use FLOSS! All submissions must tag us on social media, use #LAAFLOSS, and be public for valid entry.

To learn more and see all contest rules and regulations please visit our Floss page below!

Are you seeing red when you floss those pearly whites?

We’ve probably all experienced it: You brush like you always have, swish and rinse. Then you pull out a length of that innocent-looking white string and begin to floss. You’ve hardly started when you notice your drool is turning pink, then crimson. What’s going on? It’s like that flimsy little strand turned into a lethal weapon—and your gums are the victim.

To worry or not to worry

Bleeding gums are definite evidence that something’s amiss in your mouth. Assuming you’re not attacking your gums with floss like a lumberjack trying to take down a tree, it probably isn’t caused by flossing too hard.

Bleeding gums can be a sign of gingivitis, the first stage of gum disease. When remnants of food, the bits you cannot reach with the bristles of your toothbrush, are left between the teeth, they quickly start to colonize and turn into a film of sticky bacteria that becomes plaque. The plaque, in turn, irritates your gums, causing inflammation and swelling.

The good news is that the condition is reversible.

When you notice your gums bleeding during flossing, you might think it’s better to quit and let your gums heal. Actually, you should do just the opposite.

Continue with gentle flossing every day, and in a week or so you should see improvement. Healthy gums don’t normally bleed. If the bleeding doesn’t stop after a period of flossing daily, make an appointment with your dentist. You could have a buildup of tartar that you’re not going to be able to brush away or some other issue with your gums.

And while you’re at the dentist’s office, it’s a good idea to check with your dental hygienist on the proper flossing technique. Incorrect flossing can lead to gums that bleed simply because you aren’t effectively removing the plaque between the surfaces of your teeth.

Other causes of bleeding while flossing

If you’re new to flossing, your gums are most likely going to bleed. Think of it like exercising. The first couple of times you work out your muscles are sore. But with time and regular workouts, the soreness (like the bleeding) disappears.

Vitamin deficiencies from poor nutrition can also cause the gums to bleed. Try to cut back on eating processed foods and nourish not only your gums but your entire body with a diet of healthier whole foods—fruits, vegetables, grains, meats, fish and dairy.

And if there weren’t already enough reasons to quit smoking, use of tobacco products negatively impacts your oral health and can contribute to bloody gums.

A healthy habit for life

According to the American Dental Association, flossing is an important part of your daily oral routine and can reduce the chance of gum disease and cavities.

But recently there’s been some discussion about the best time to floss. Before or after brushing? The strongest argument seems to support before simply because you will be more likely to do it. And if you regularly do it, you’ll have healthy gums. And that’s something to smile about.

If your gums are bleeding regularly and the above information isn’t putting your mind at ease, contact Lane and Associates Family Dentistry today to set up an appointment and let us help.